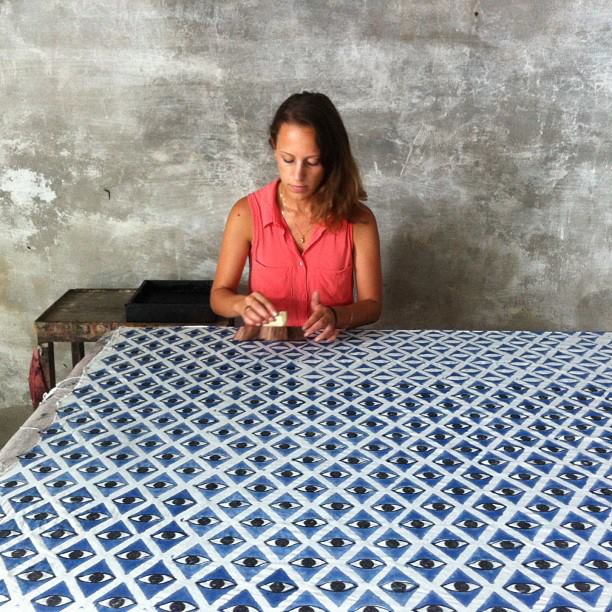 I traveled to India for the month of August 2013, on the National Artist Teacher Fellowship, to study hand-wood block printing from the master artisans in the village of Bagru. I was so pleased to find Savista as a base to call home for my several weeks abroad. I’m an experienced printer who specializes in textile design and works as a design educator in New York City. I’ve been trained in all forms of printing, but I wanted to work with the craftspeople in a region where the art form has thrived for generations. That is how I found master printer Vijendra Chhipa and the remarkable Bagru Textiles. 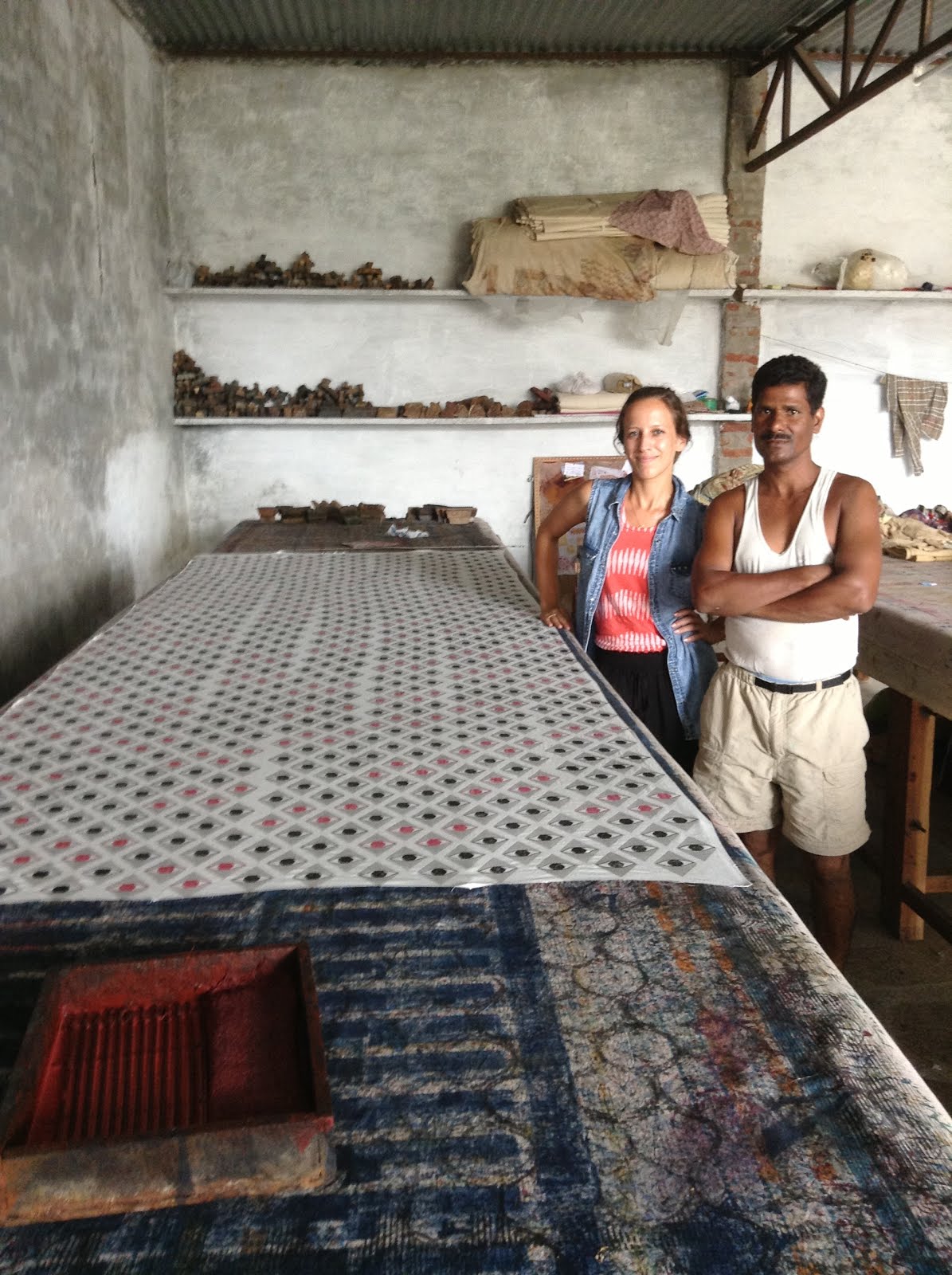 Vijendra and I in his studio after printing some yardage.

Between working at Bagru Textiles and staying at Savista Retreat,
I gained an extraordinary perspective on the people, crafts, and spirit of India. The best way for me to communicate my experiences is through visuals.

Here are some of my favorites moments at Bagru: 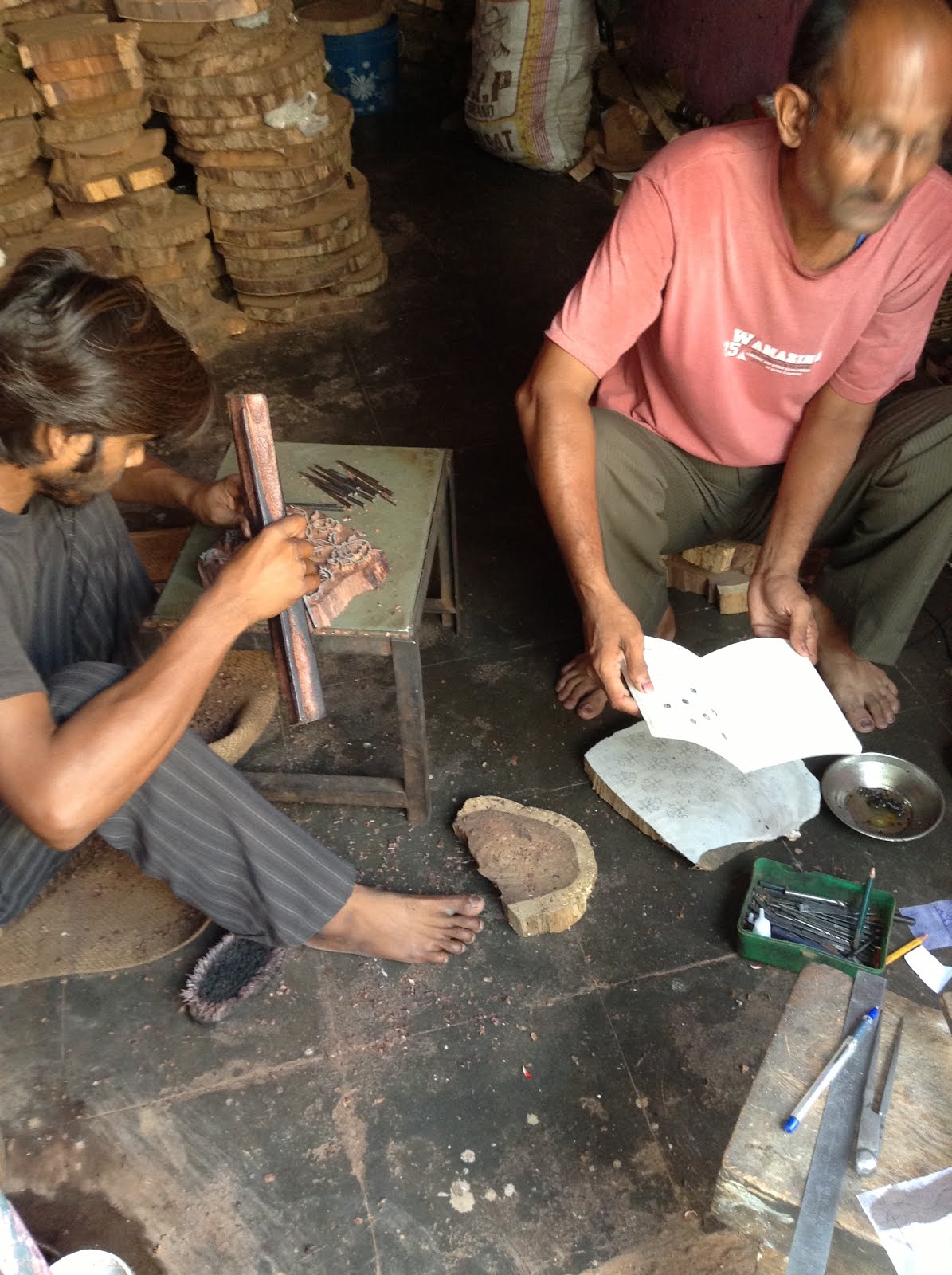 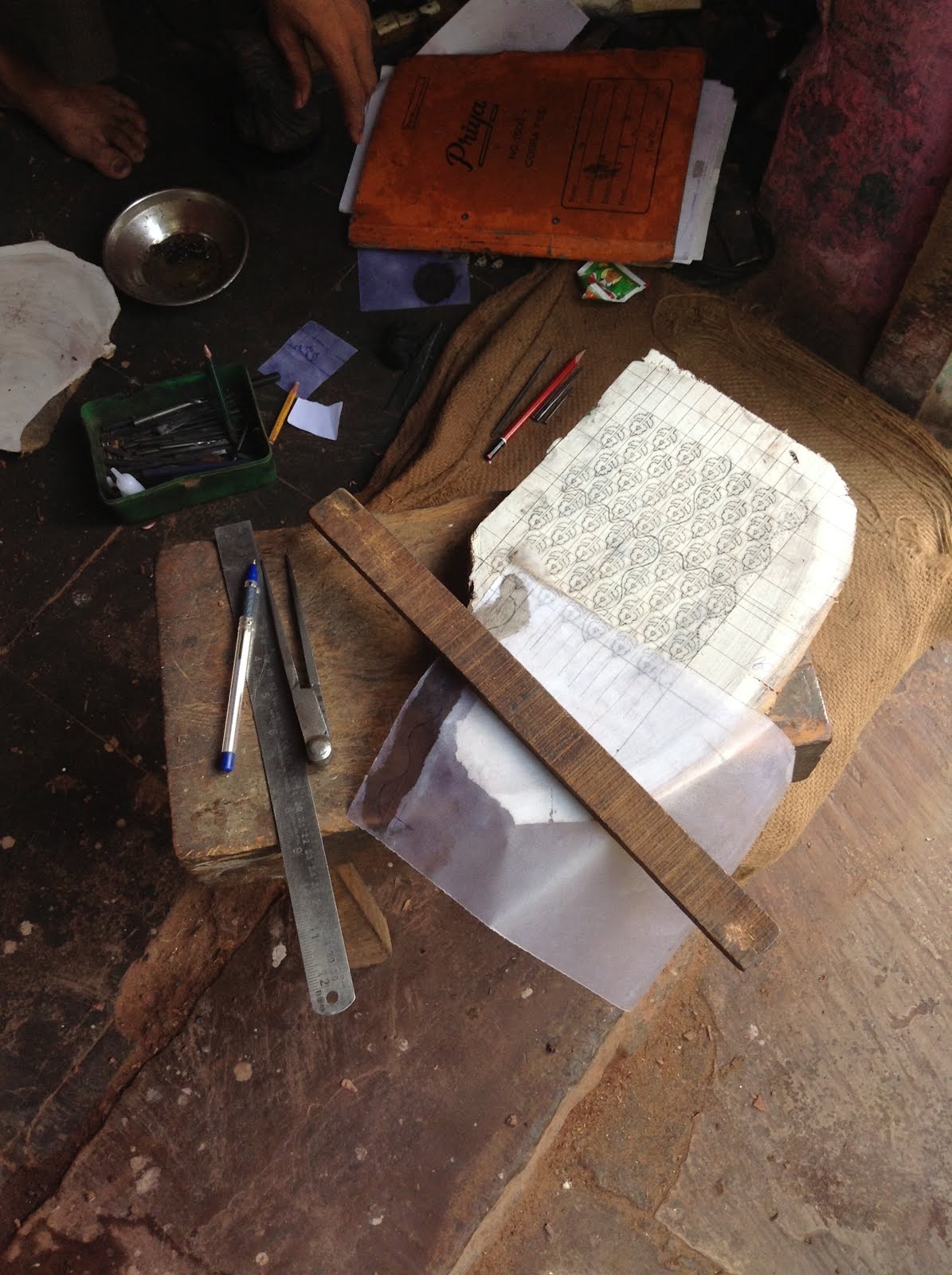 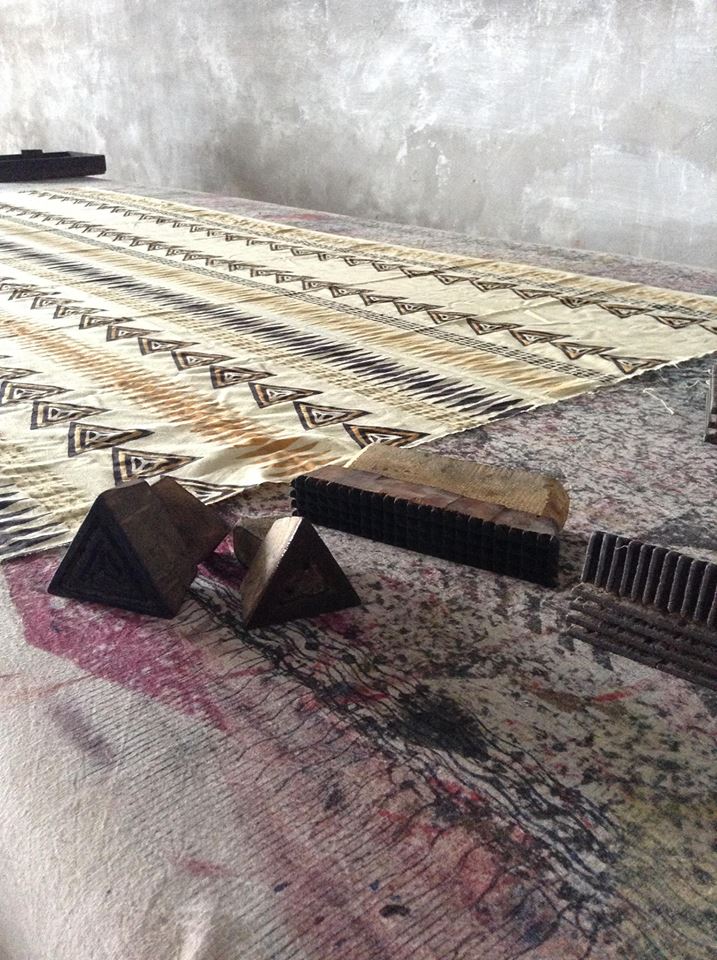 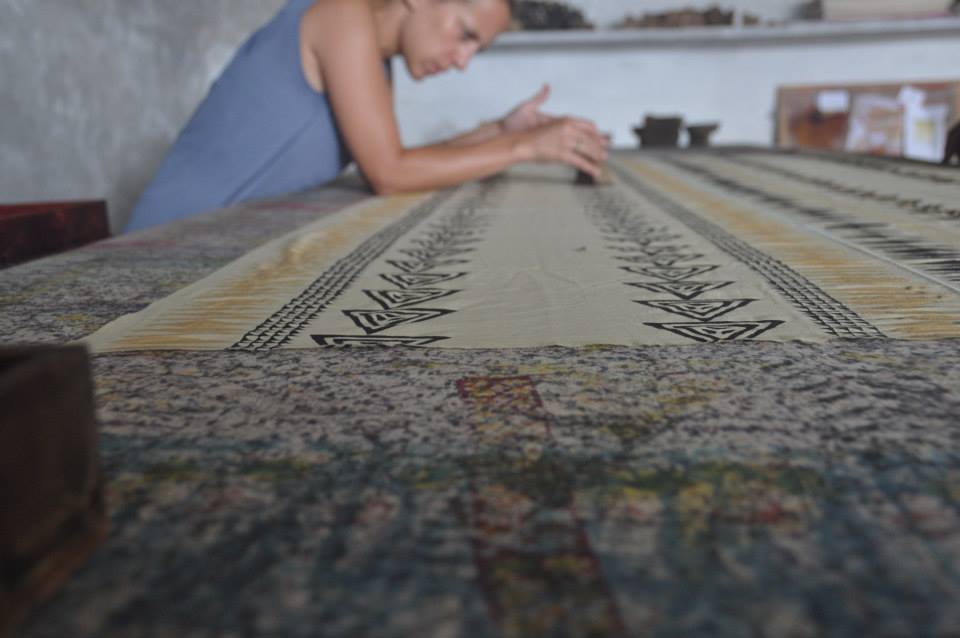 Printing with all natural inks 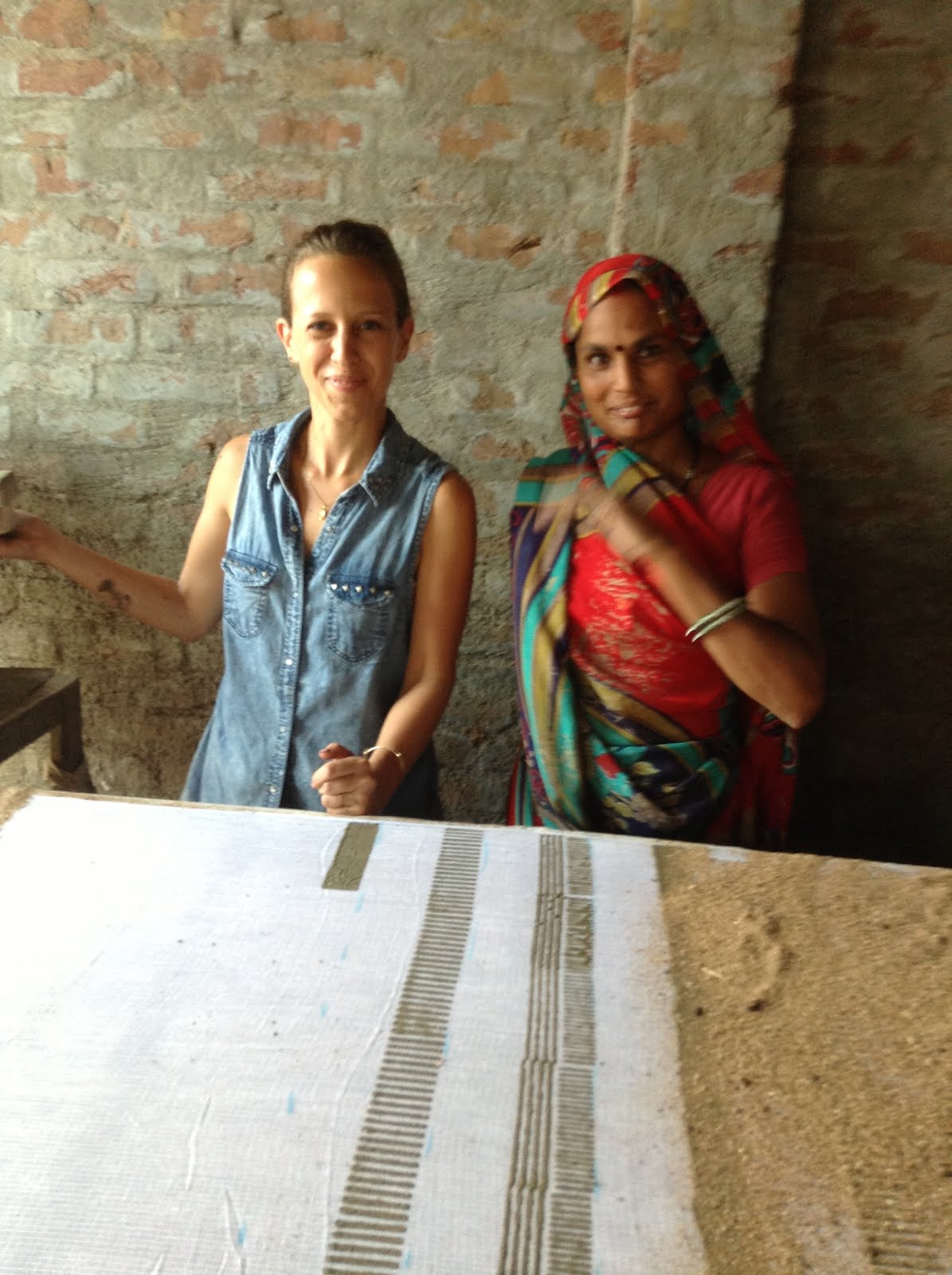 I learned Dabu, or mud resist, printing from Hemlata. 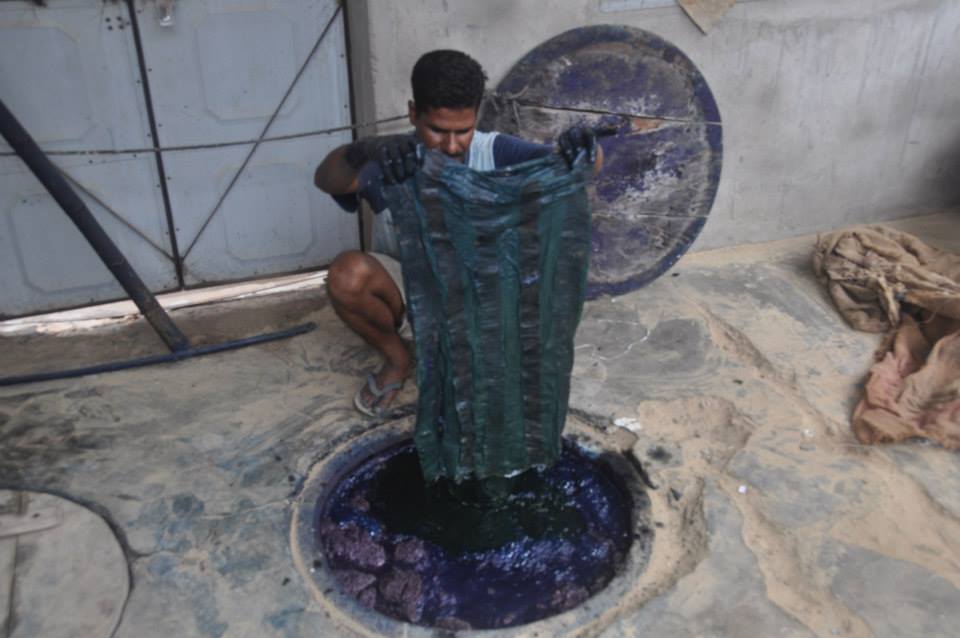 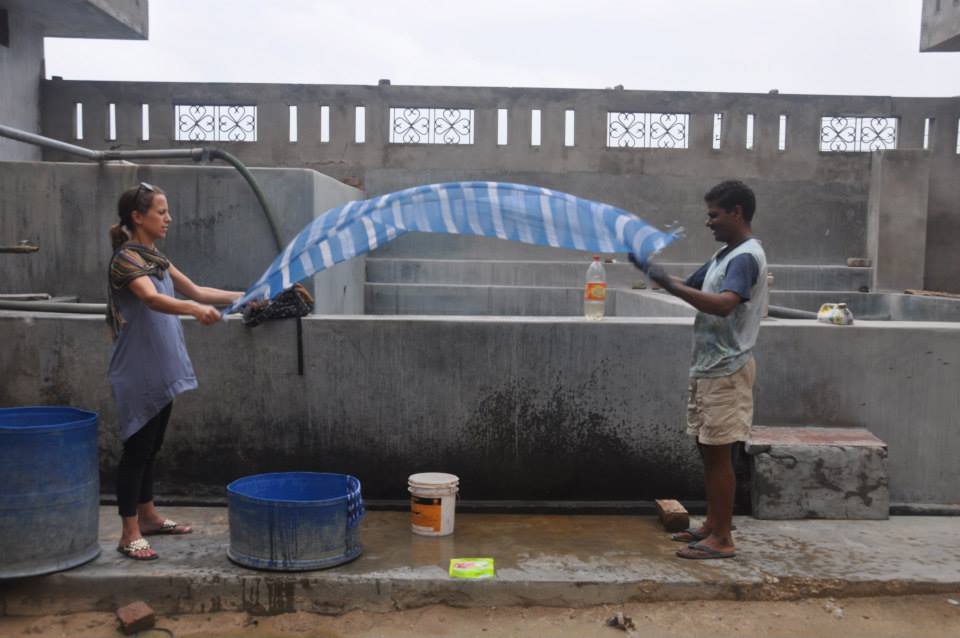 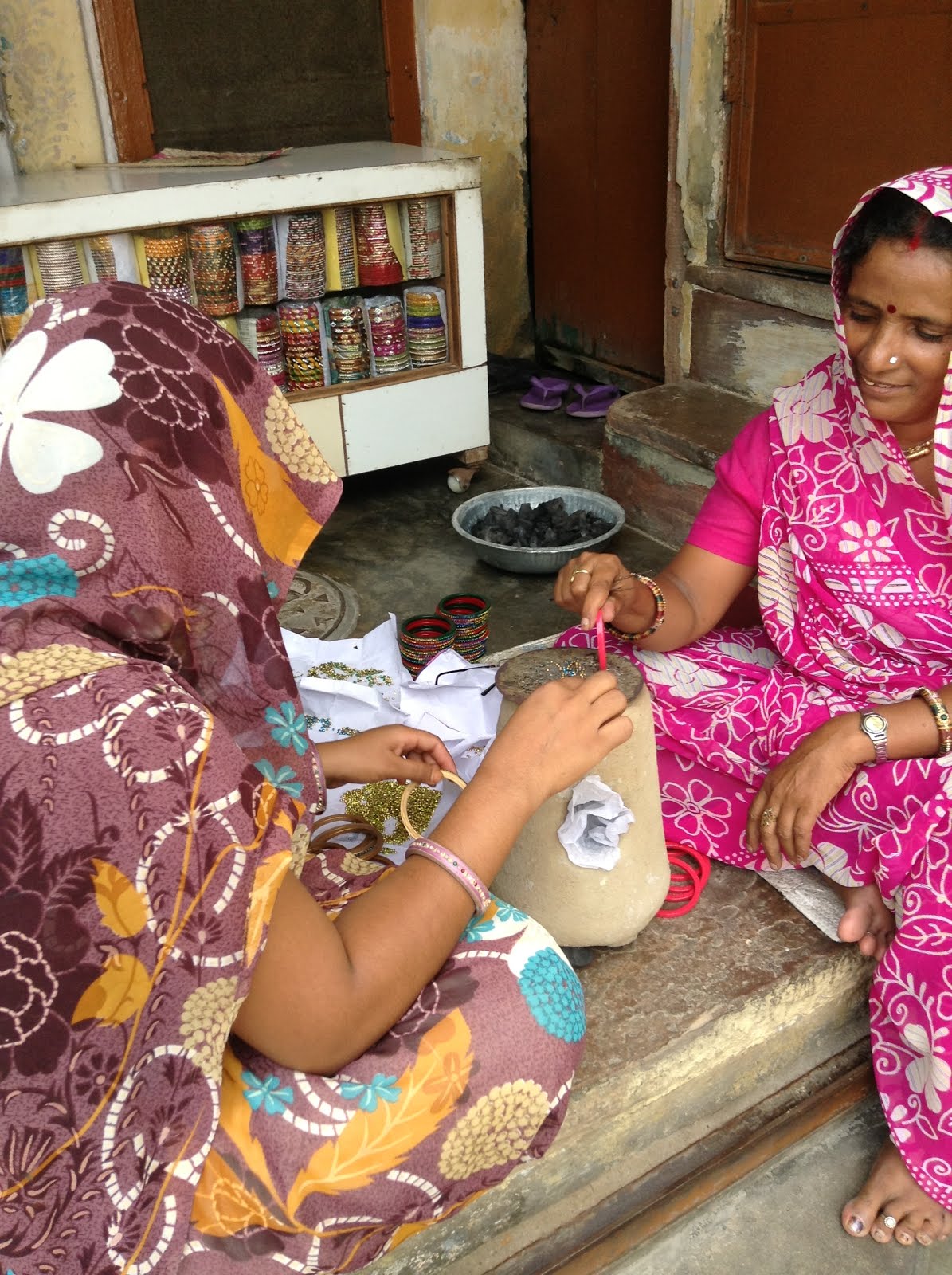 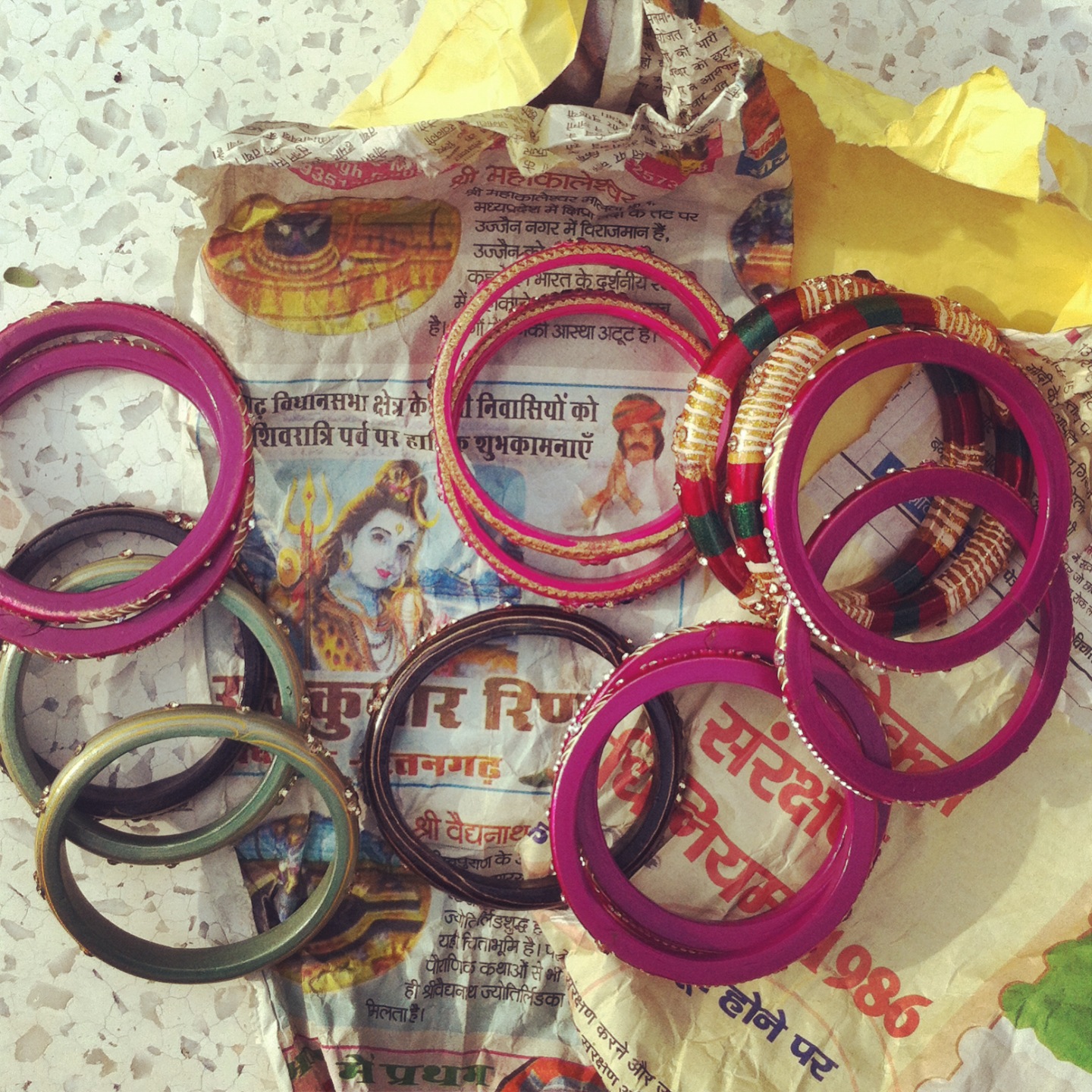 Watching the bangle makers! (and obviously buying a few dozen) 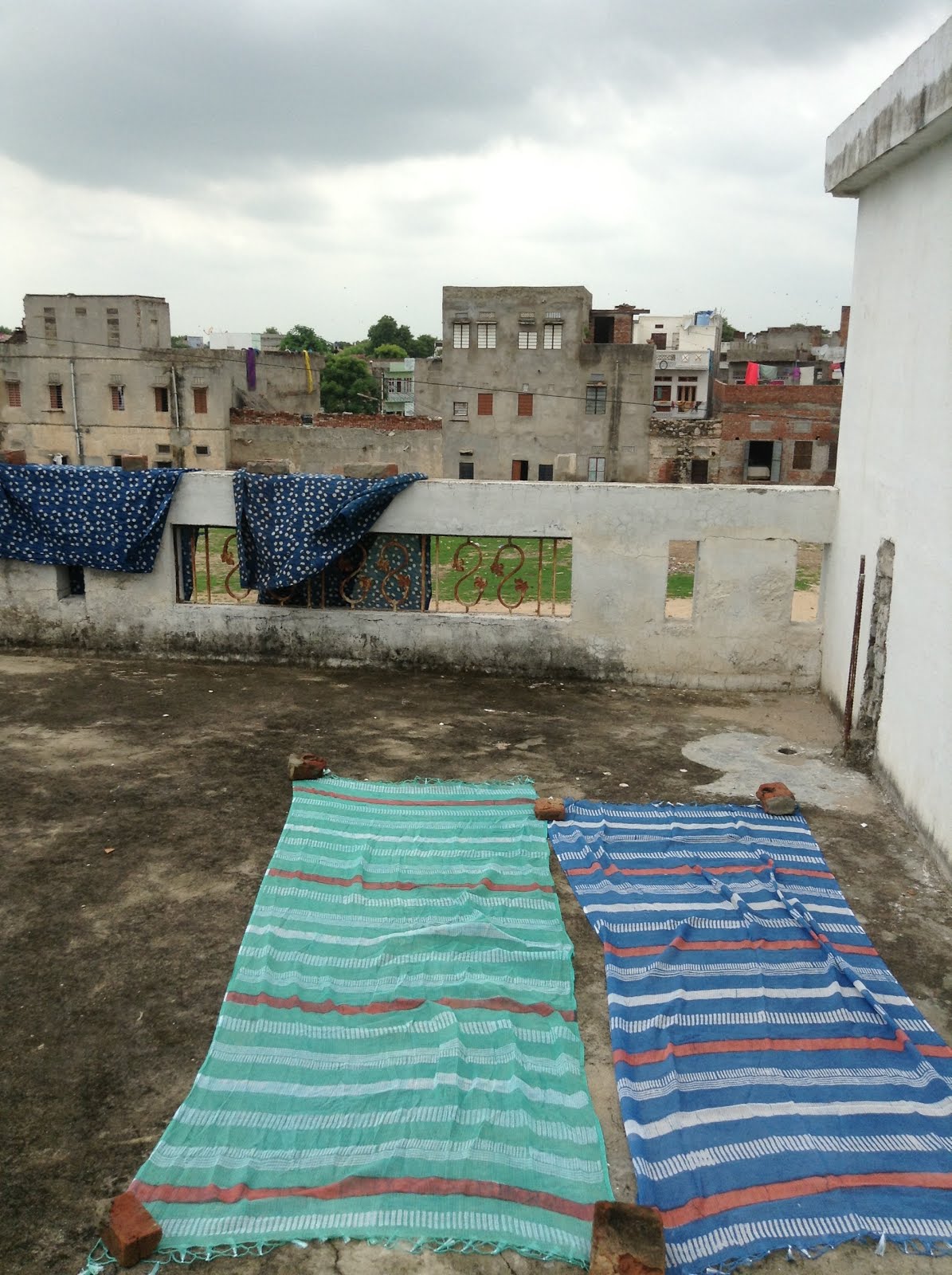 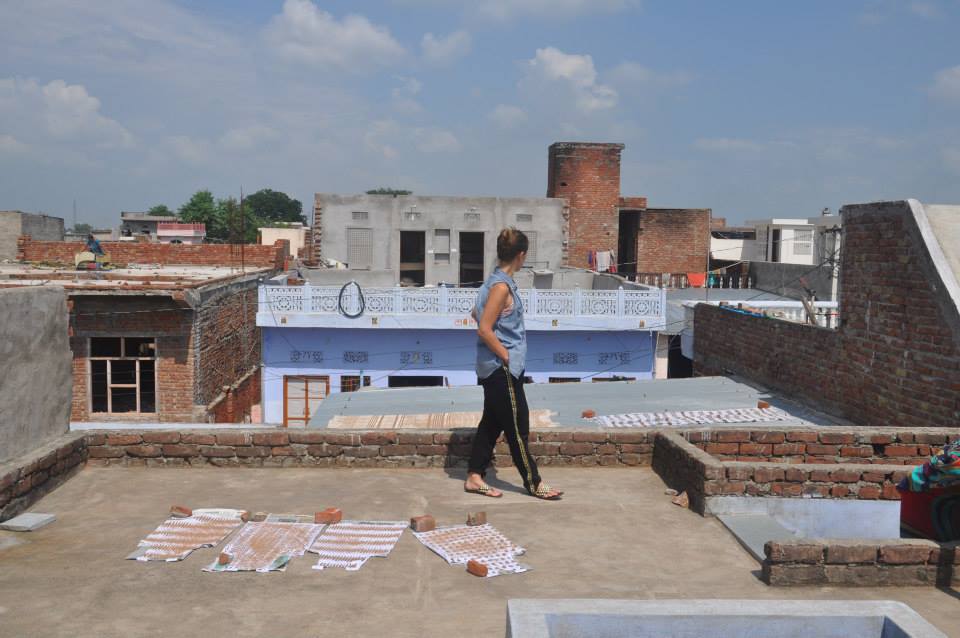 Drying finished products on the rooftops and taking a much needed breather. 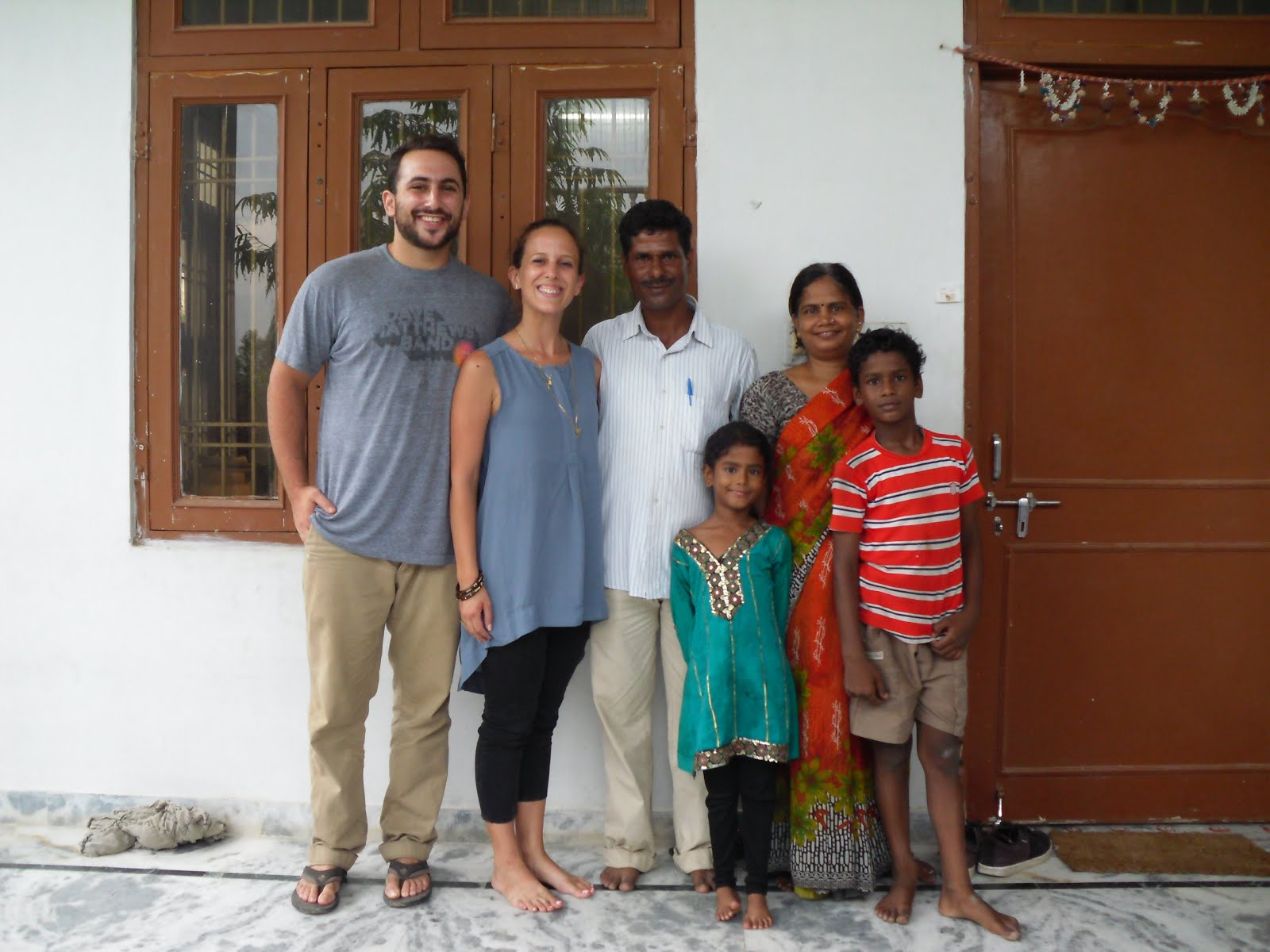 Vijendra and his family, including Eric who is working there to help grow the Bagru Textile company and community

And here are my favorite Savista Retreat moments: 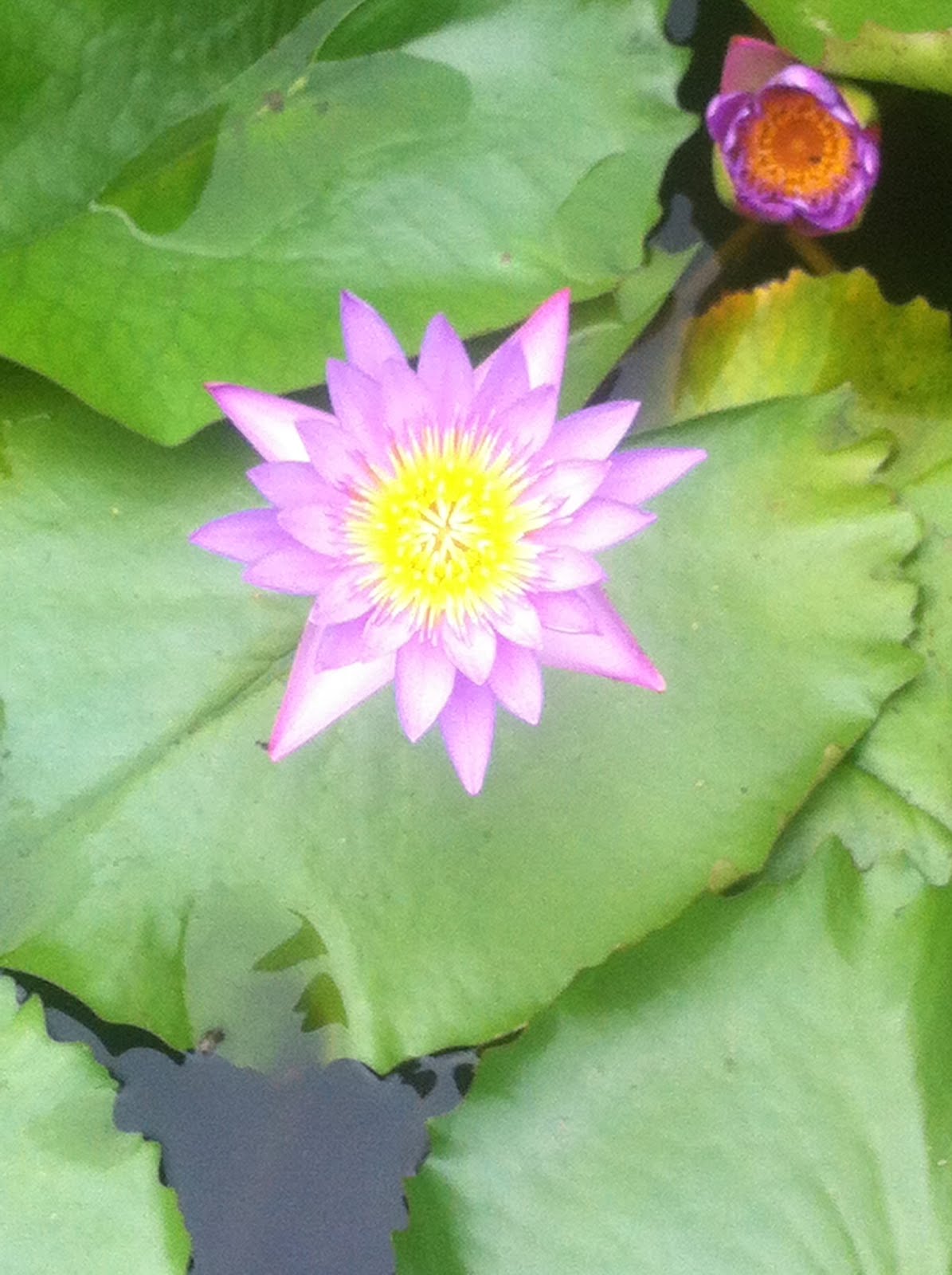 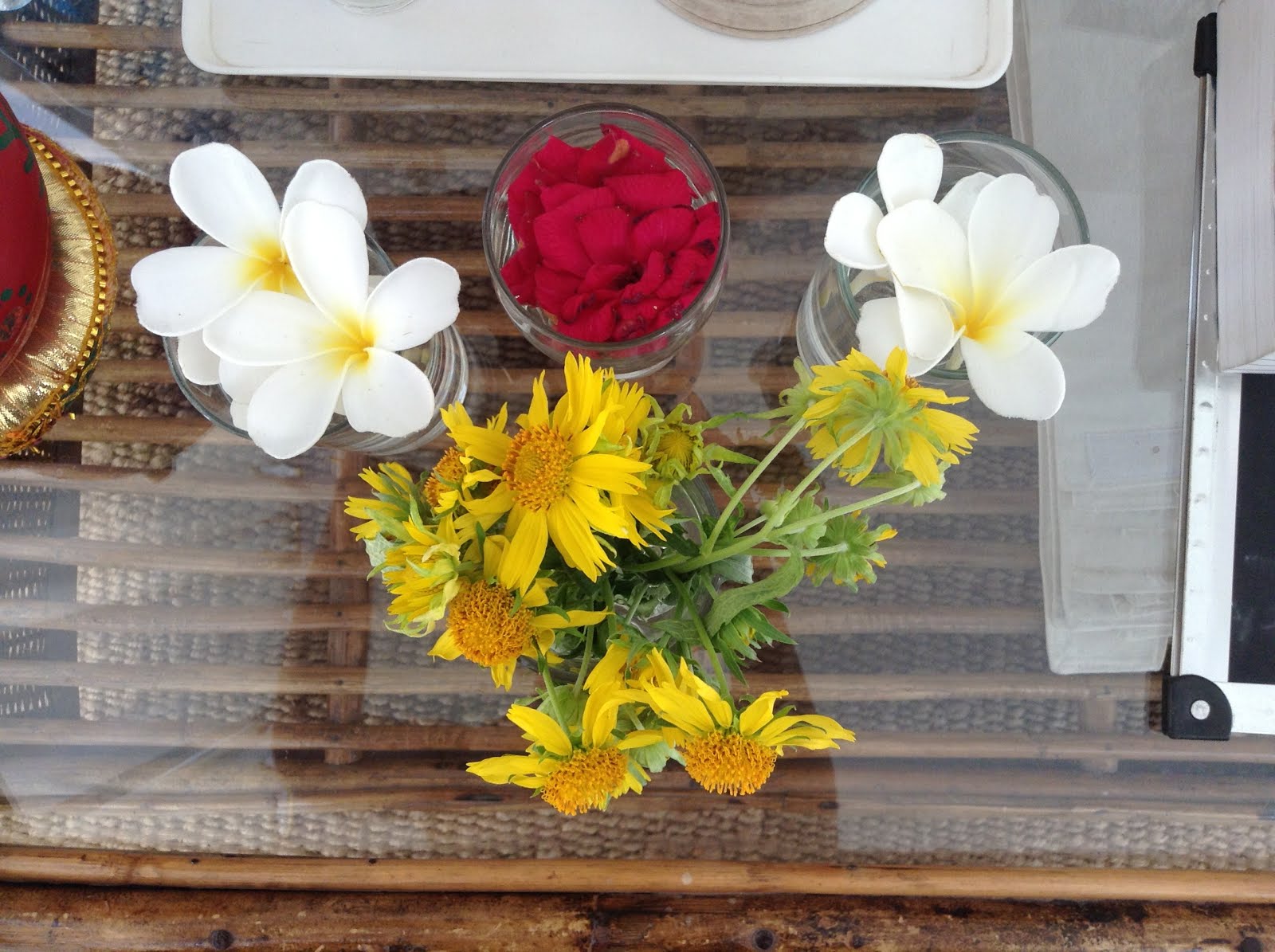 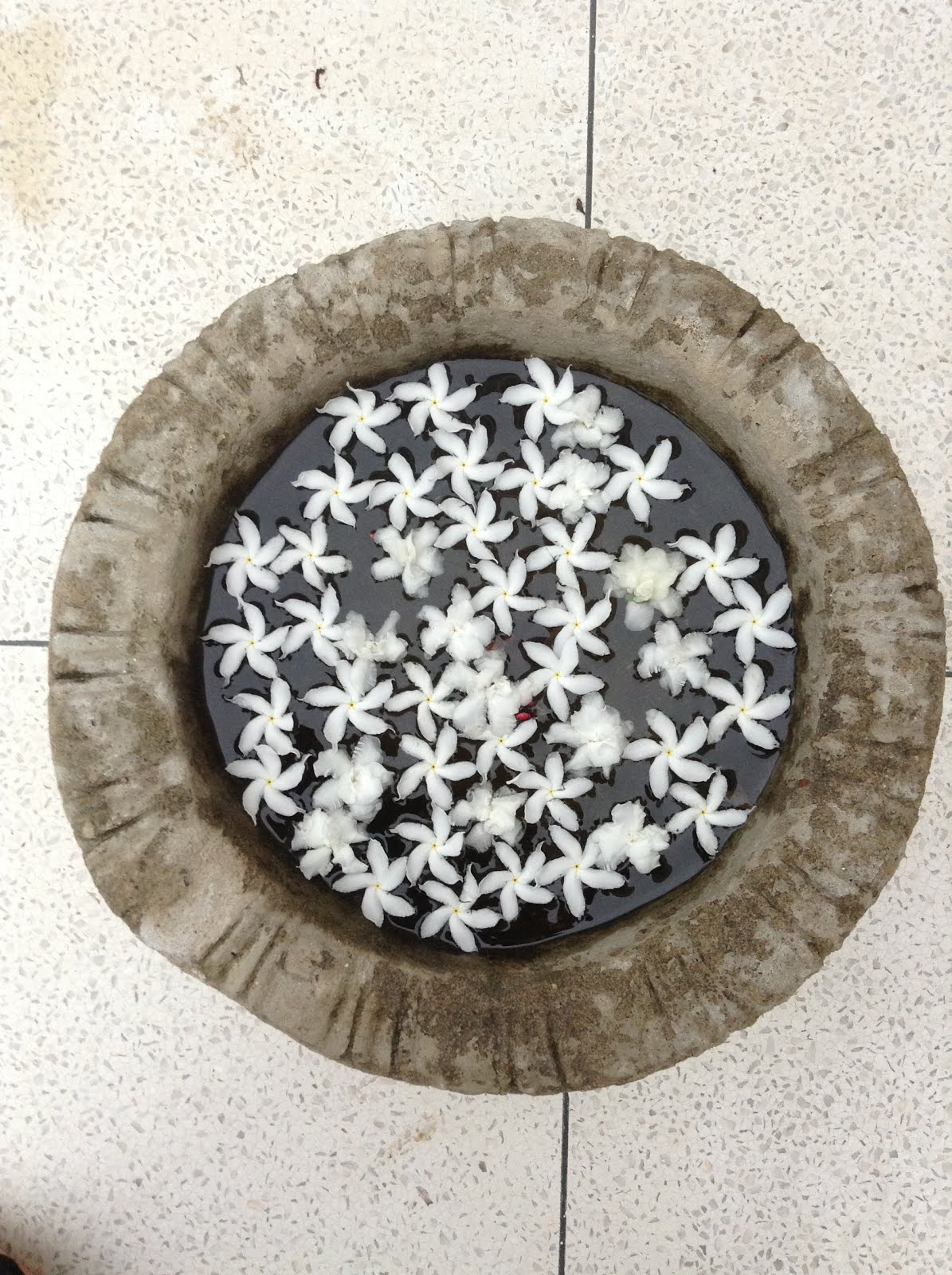 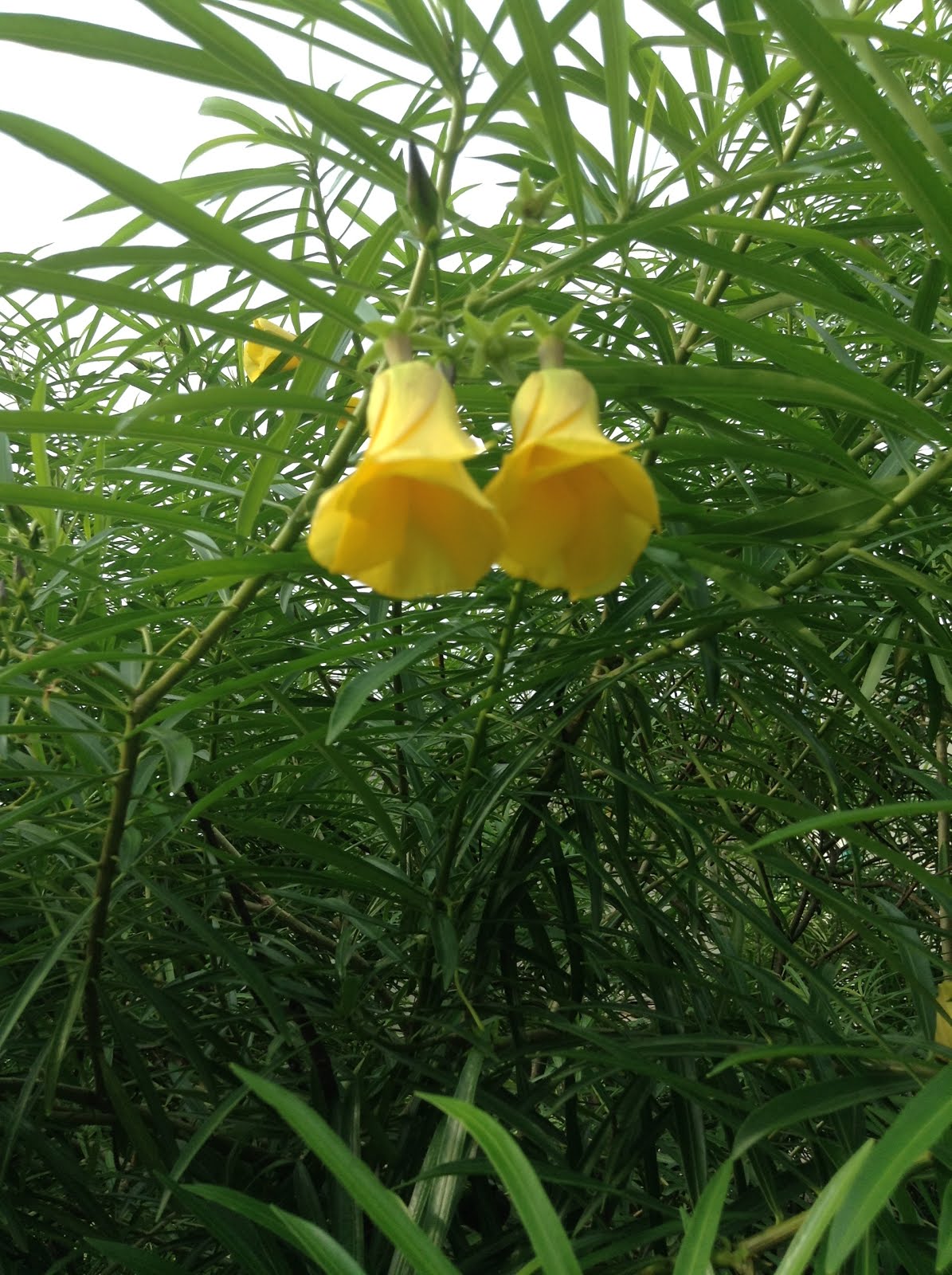 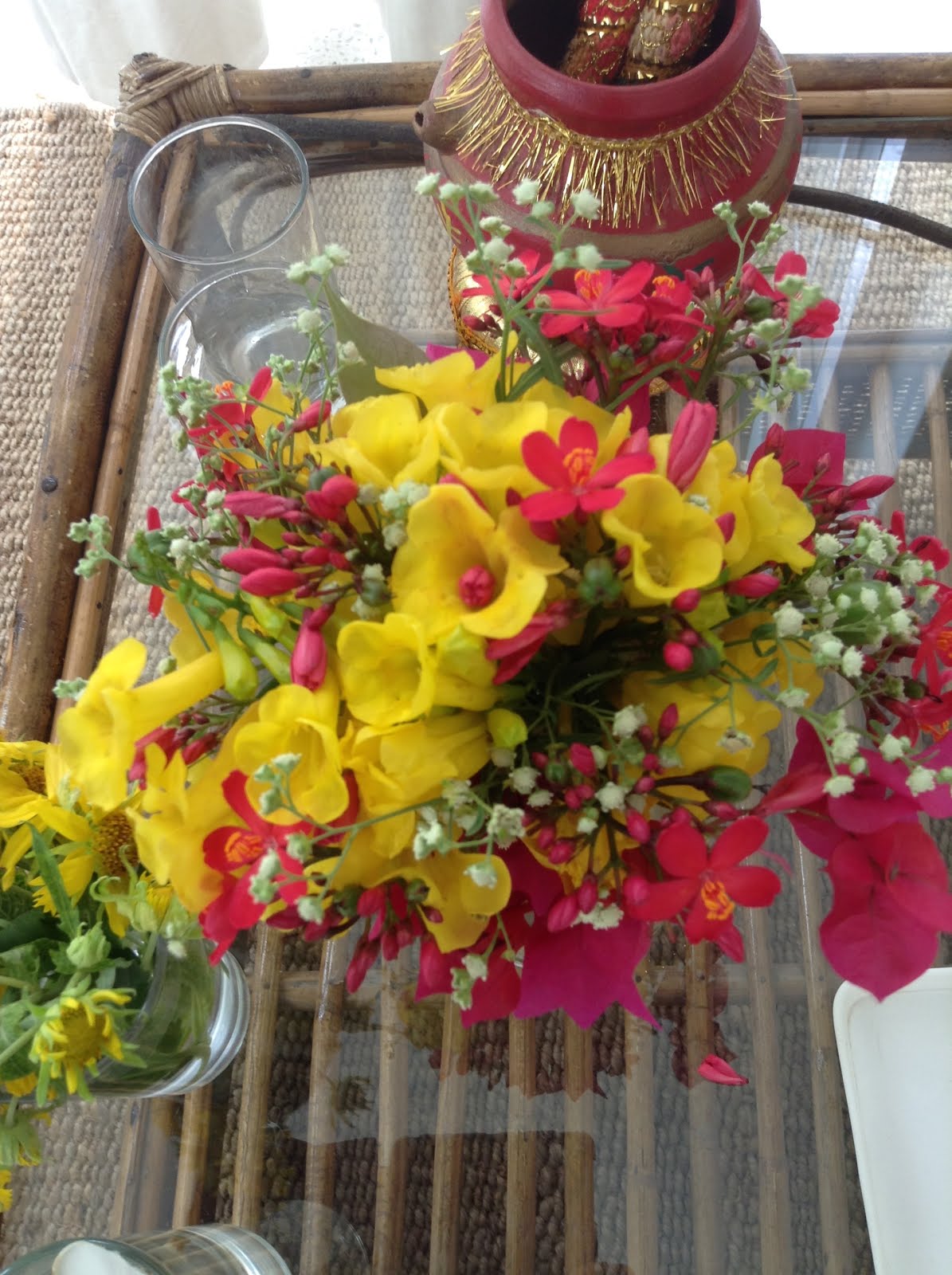 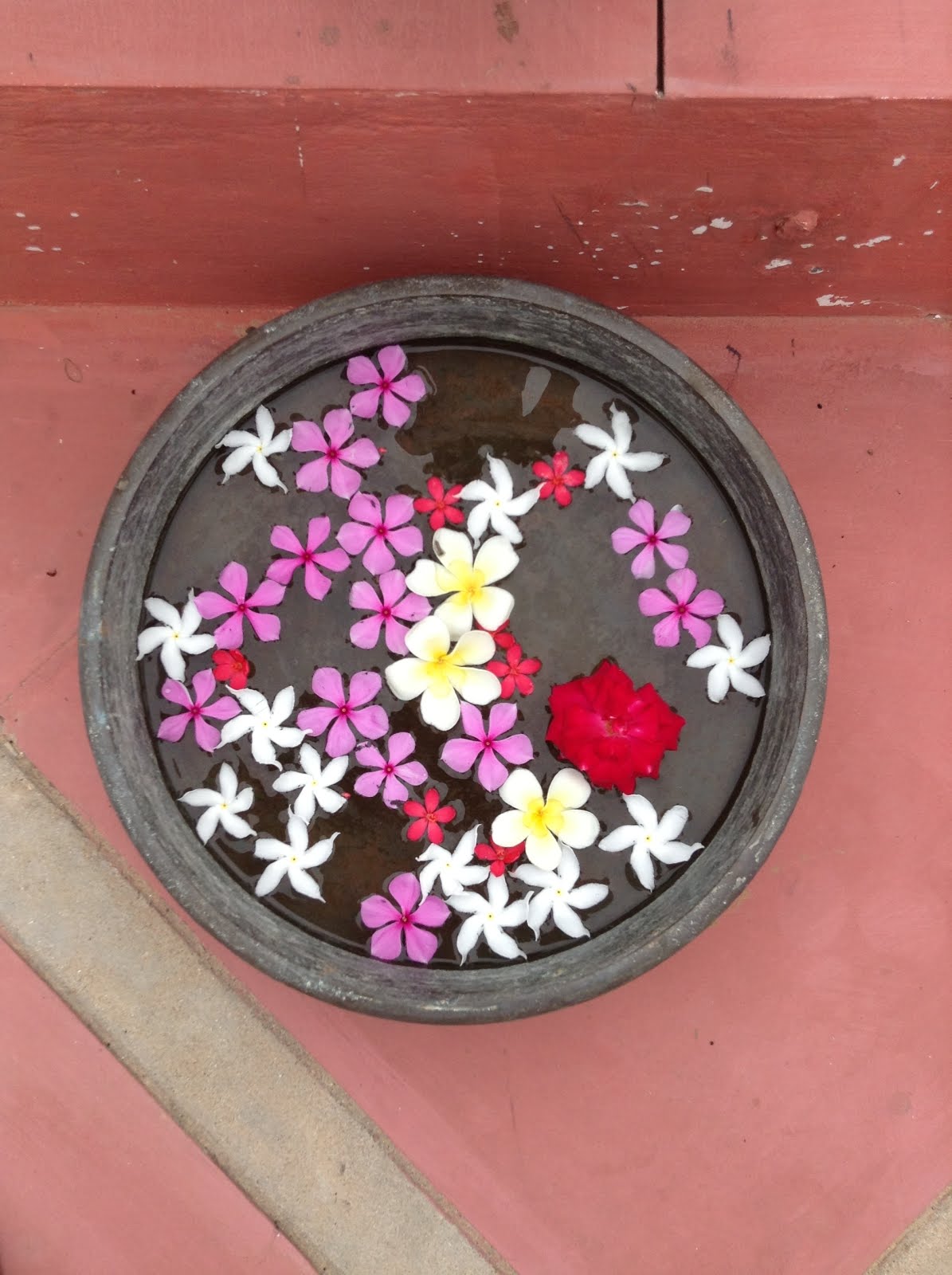 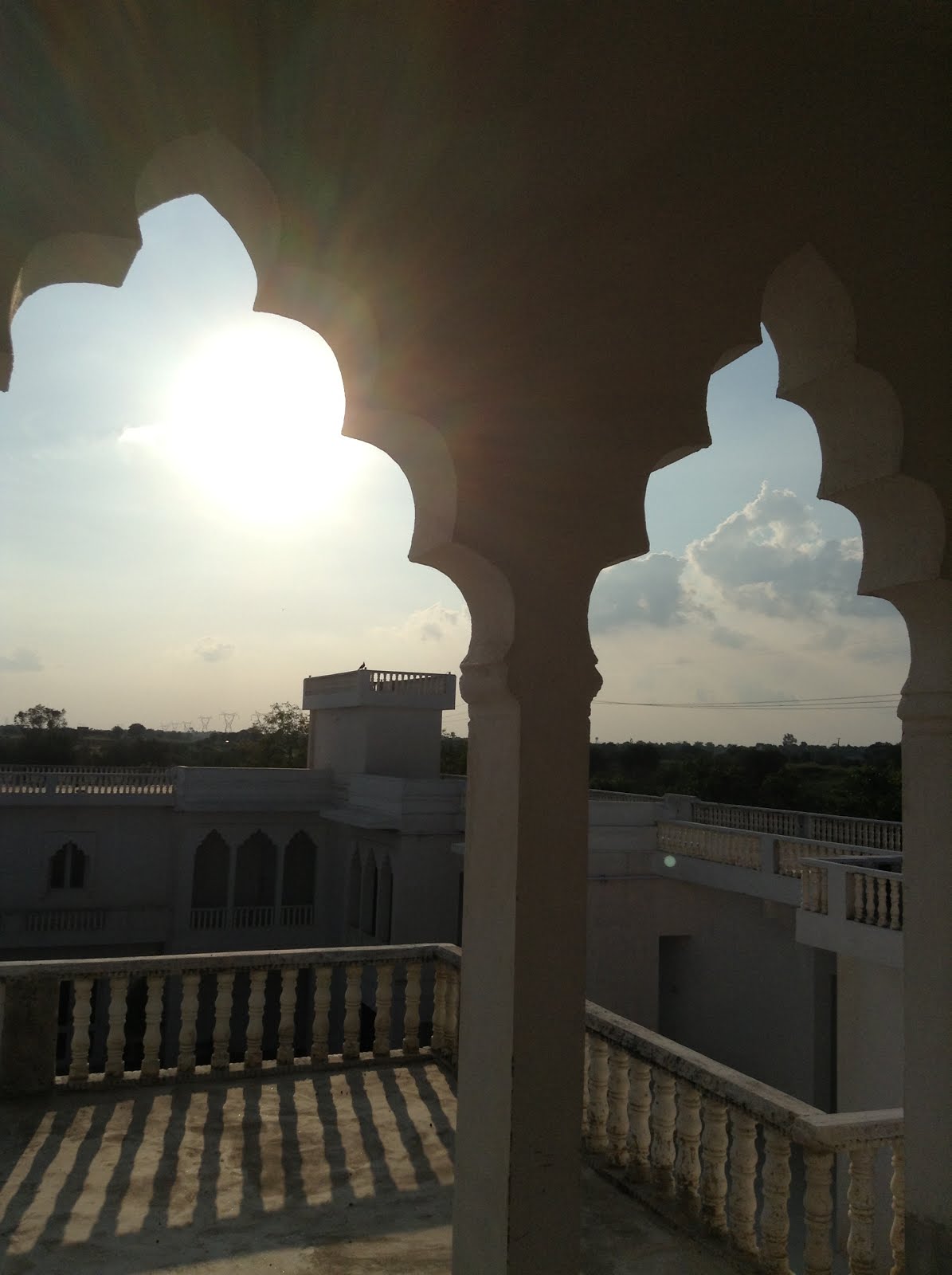 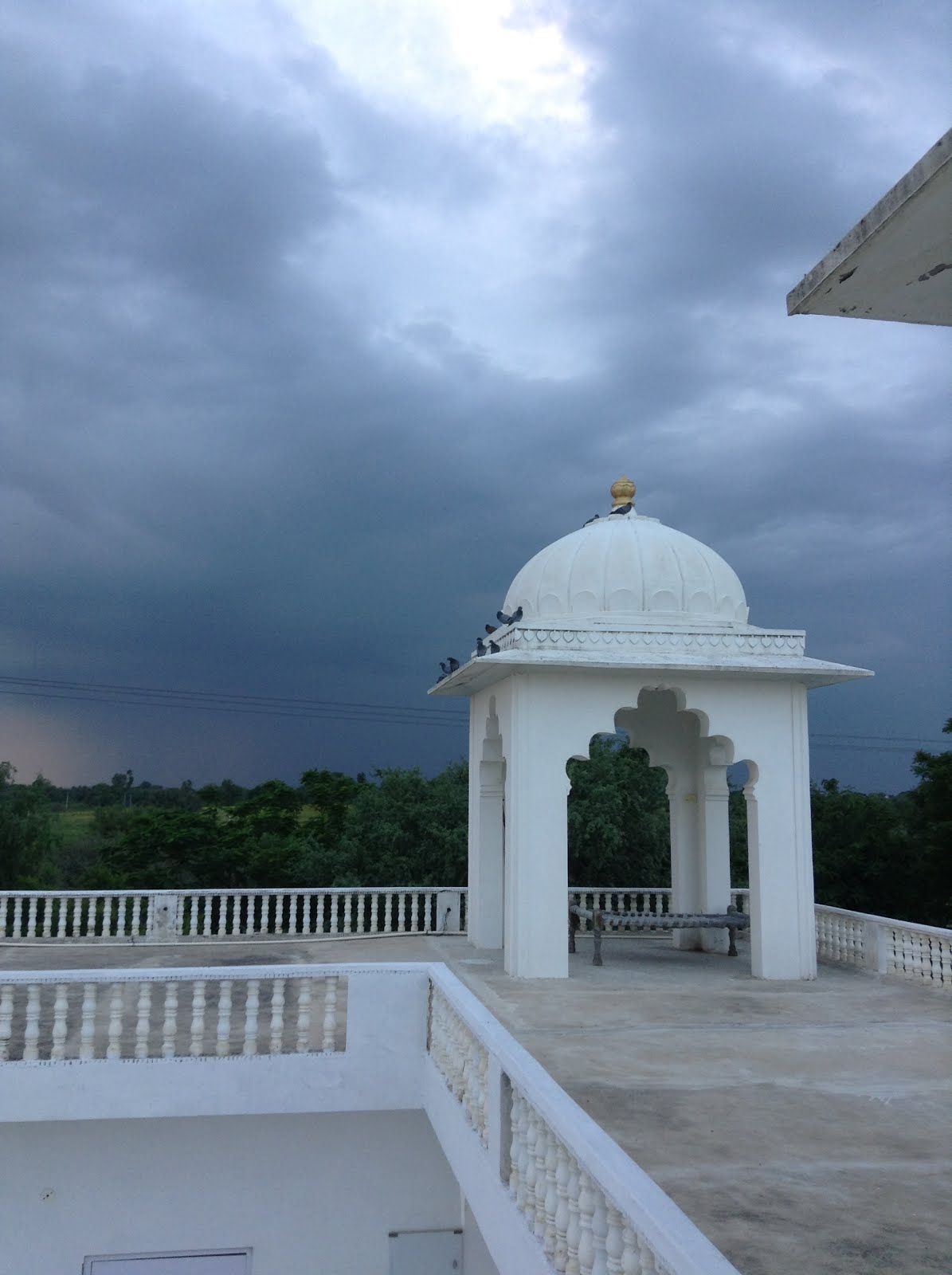 Getting home from a long day of printing, climbing up to the Haveli’s roof and watching the sunset or a monsoon storm roll in. 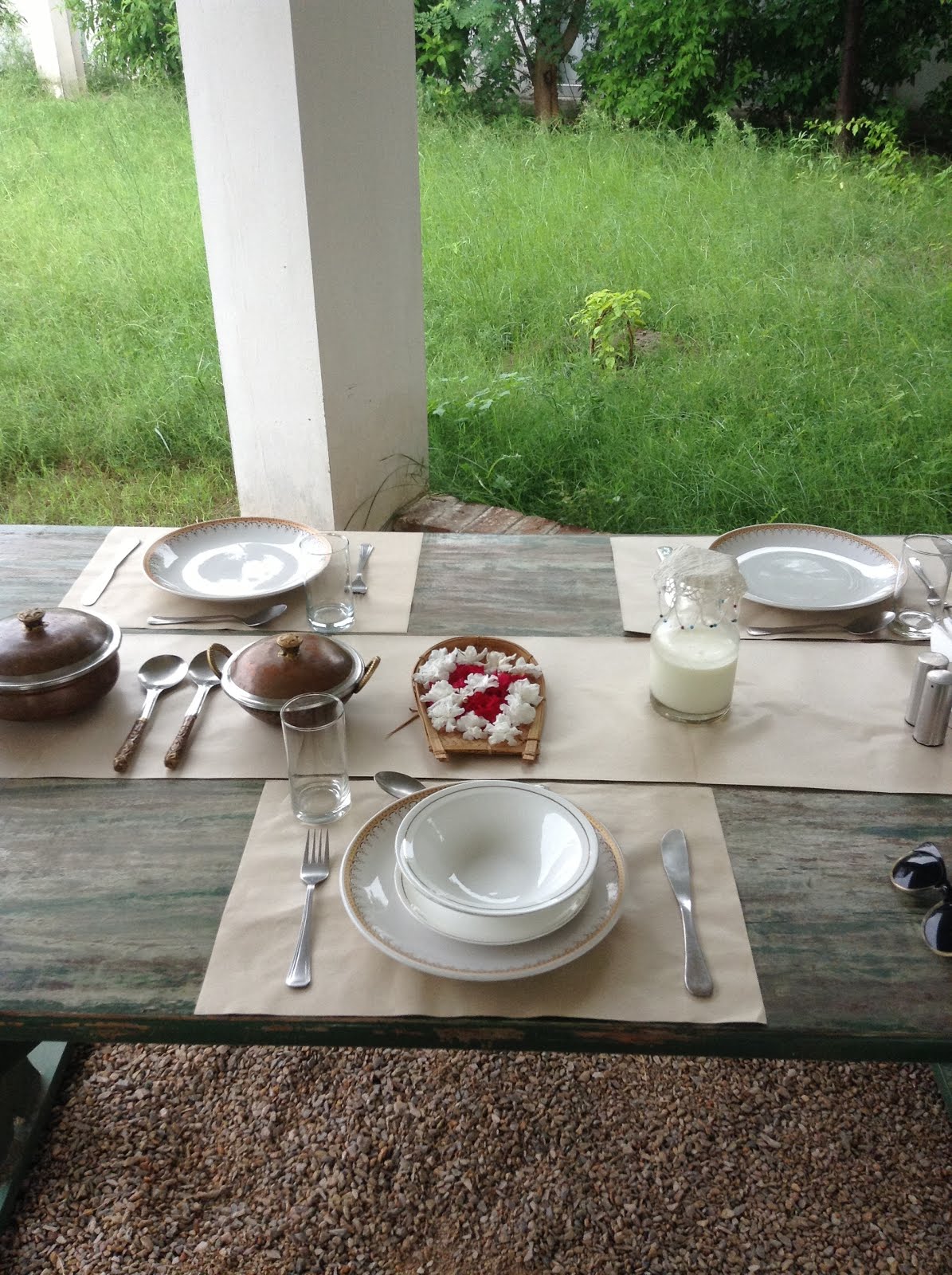 Beautiful breakfast outside every morning… 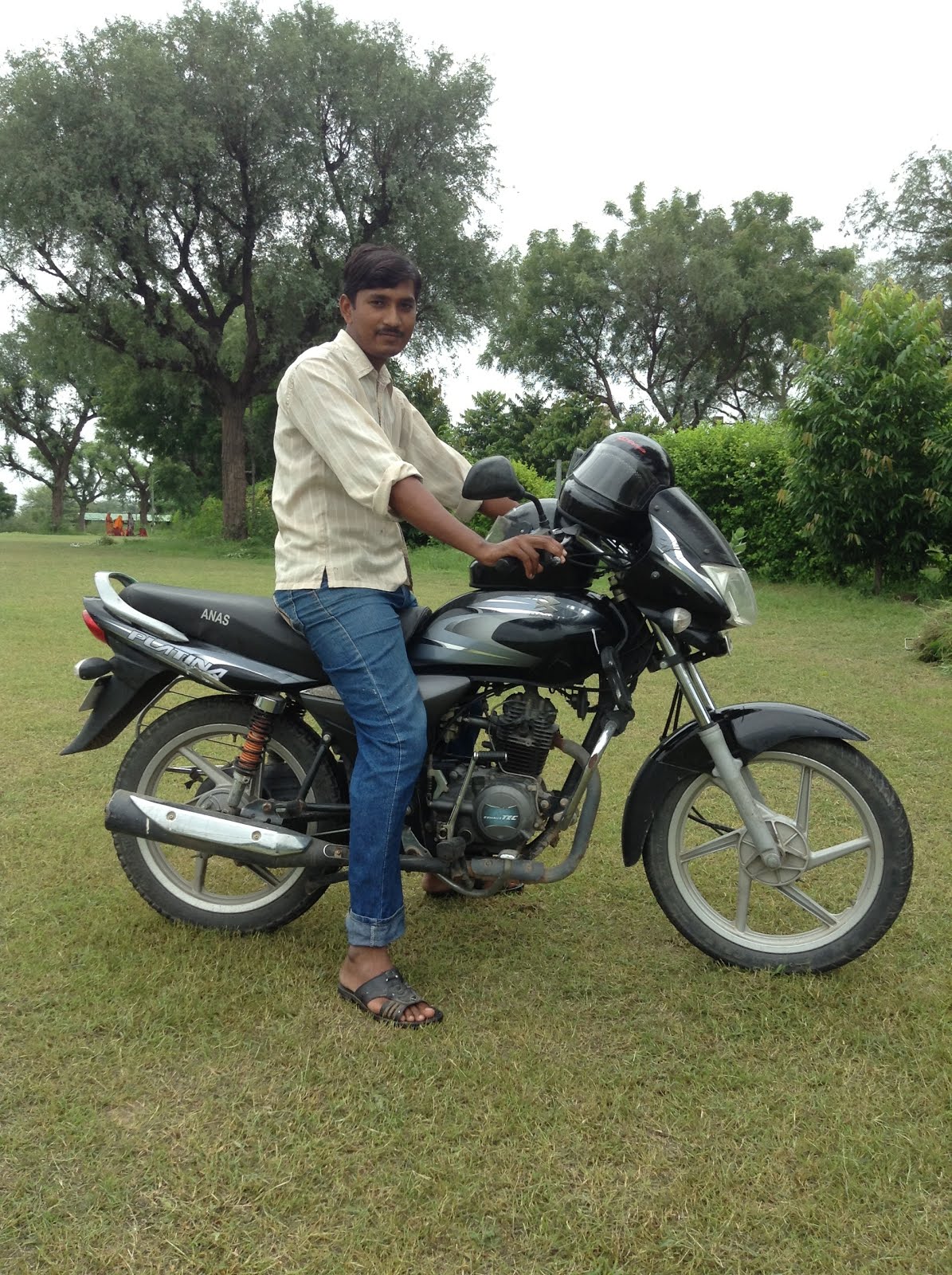 …then a ride with Gajendra through the rural fields to the printing village of Bagru. 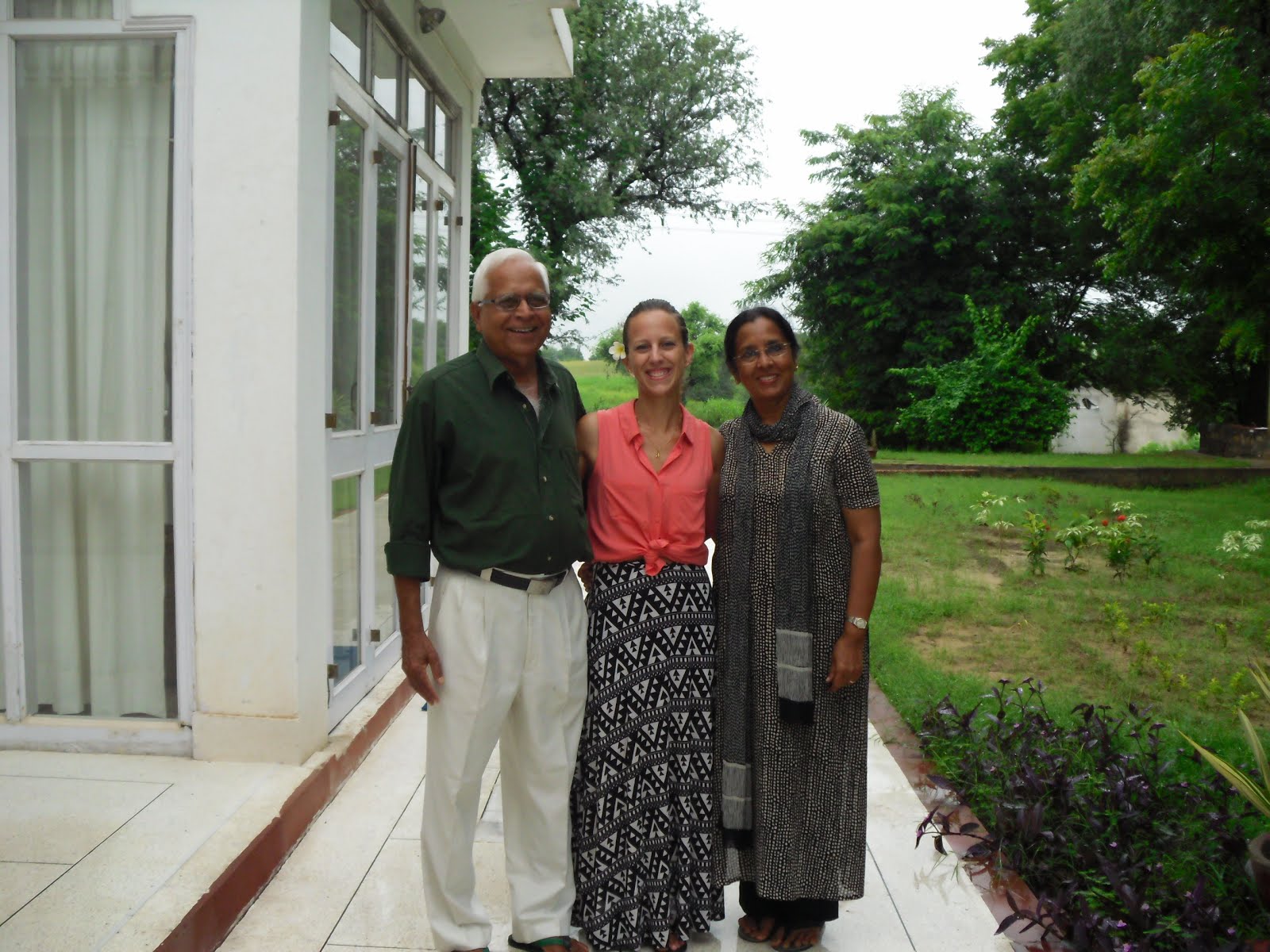 One of the best parts about staying at Savista Retreat is getting to know the owners. I learned more about Indian culture from dinner and chai tea breaks with Radhika and Bhanwar than from any museum I visited. I learned everything from how I could eat the neem tree leaves on the property after a meal for digestion to why an statue or picture of the Hindu God Ganesh hangs over everyone’s doorways. They made sure I was completely taken care of as if I was their own daughter. They truly are the reason why Savista Retreat is so extraordinary!

It was Julie Zenobi’s first trip to India. And her mission – learning hand blockprinting using traditional techniques, from master artisans of Bagru.

What a place to arrive at, straight from New York…A village in the middle of northern India!  It had all the ingredients of a massive culture shock!

But Julie settled quickly and smoothly into her life at Savista and her daily blockprinting trips to Bagru. It helped that as a textile designer and artist, she was able to see beauty in everything around her and delight in the simple pleasures of nature. As an educator, she was curious about everything, and receptive to new learnings. And being warm, affectionate and trusting by nature, she was soon best friends with everybody in her new environment. Above all, it was Julie’s work ethic which made her special.  In the evenings after her return to Savista and on her days off from printing lessons, she would be in the Savista library working on her notes and designs towards the Fellowship report that she was required to present at a public event after her return.

Julie not only learnt snippets of Indian history during her stay in India, she also shared with us snippets of history that we had not known of before. Upon learning that her family name Zenobi resonated with an Indian name of Persian origin – Zenobia – found among girls of the Parsi community, Julie told us a most interesting story (the Parsis of India are a community of Zoroastrians whose ancestors fled Persia centuries ago to escape conversion to Islam; they accidentally arrived in India, and have made it their home ever since).

Zenobia was the queen of the kingdom of Palmyra (in modern day Syria) in the third century.  A beautiful woman,  fearless warrior, and ambitious monarch who adopted the title of “Empress of the East”,   Zenobia dared to challenge the might of Imperial Rome, but was defeated in battle. The Romans did not kill the proud queen, but shackled her in chains and brought her to Rome, there to be publicly paraded in her silks while still in chains.  Some of her loyal warriors secretly made the journey to Italy in
the hope of freeing their queen and helping her return to claim back her rightful kingdom. But it was never to be. Zenobia died a prisoner in Rome. And the “Zenobis” – the followers of Zenobia – lost heart and melted into the local population, settling in Umbria. Julie’s parents migrated from Italy to the U.S., where their Asian association lives on in the name that they continue to carry.

We thought the story beautiful enough to share with the readers of our
blog, as a reminder of how closely connected we all are as citizens of this planet, whichever part of the world we may think we belong to.